The Mother & Baby Substance Exposure Initiative (MBSEI) was a joint partnership between CPQCC, the California Maternal Quality Care Collaborative (CMQCC), and Health Management Associates (HMA) to improve outcomes for mothers and newborns impacted by substance exposure, with a specific focus on Opioid Use Disorder.

MBSEI emphasized care that maintains the mother-baby dyad throughout the hospital stay and addresses treatment and prevention of substance exposure both during and after pregnancy.  The initiative included a statewide collaborative involving obstetric and neonatal teams at 37 hospitals and the development of an interactive online toolkit on perinatal substance exposure for maternal and newborn care providers. The Mother & Baby Substance Exposure Initiative was funded by the California Department of Health Care Services (DHCS) as part of a Substance Abuse and Mental Health Services Administration (SAMHSA) State Opioid Response grant. While this project has formally ended, the Maternal Substance Exposure Initiative (MatEx) Database is still collecting data and actively recruiting centers interested in improving care for infants with substance exposure.

CPQCC's Simulating Success Collaborative was designed to help NICUs implement simulation-based neonatal resuscitation training programs at their hospitals to improve resuscitation team performance during preterm and term deliveries. Simulation-based learning can improve the safety, efficiency, and effectiveness of neonatal resuscitation. Safe, effective, and efficient resuscitation team performance can help prevent neonatal mortality and serious morbidities such as bronchopulmonary dysplasia (BPD) and hypoxic-ischemic encephalopathy (HIE).14 NICU teams participated in the collaborative. The teams were divided into four groups, each of which completed a 15-month program, which included three months of preparatory training followed by 12 months of running simulation and debrief sessions.  CPQCC is grateful for its partnership with the Stanford Center for Pediatric & Perinatal Education (CAPE) in implementing the Simulating Success Collaborative and the extensive expertise in simulation that they brought to the initiative.

CPQCC's Antibiotic Stewardship Collaborative included 28 of our member NICUs, the largest group to date, and aimed to reduce antibiotic utilization rates through the application of a bundle of best practices, including routine antibiotic “time-outs” 48-72 hours after obtaining cultures. Preliminary findings indicate that the collaborative group eliminated roughly 11,700 “antibiotic days” across California and safely decreased the antibiotic utilization rate (AUR) by 13.8%. These improvements helped to decrease the risk of antibiotic resistance and adverse drug events as well as the cost of care at these NICUs. 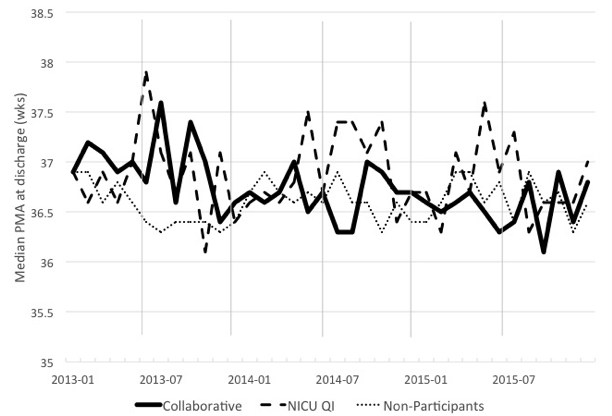 20 of our member NICUs participated in the Optimizing Length of Separation Collaborative, which aimed to reduce the length of hospital stay by three days for infants born between 27-32 weeks gestational age. Participants were encouraged to use a standardized approach to feeding, discharge planning, and apnea/bradycardia management in order to achieve this aim. By the end of the 18-month collaborative, participants decreased length of separation by three days and increased early discharge (before 36 weeks, 5 days) to 41.9% from 31.6%. 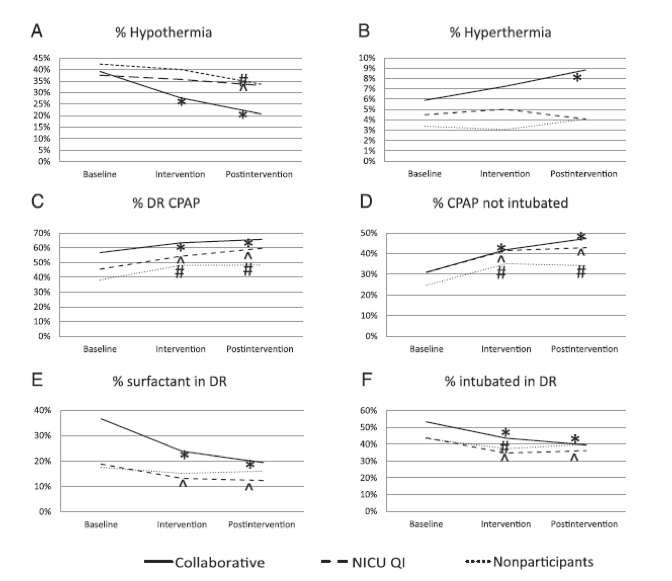 The 20 hospitals in the Delivery Room Management Collaborative saw a collective decrease in hypothermia, delivery room intubation, and surfactant administration as a result of their participation. The project aimed to improve management of high-risk deliveries through the implementation of a best practice bundle that included strategies to avoid hypothermia; establish lung volume in the least-invasive manner; and support teamwork with checklists, briefings, and debriefings.

11 CPQCC NICUs participated in a collaborative designed to increase breastmilk feeding rates for VLBW infants through implementation of a set of best practices outlined in the CPQCC Nutritional Support of the VLBW Infant Toolkit. The toolkit was subsequently updated in 2018. By the end of the collaborative, participants had increased breastmilk feeding at discharge to 64%, from 54.6% at the start of the collaborative. Participants also saw a decrease in NEC rates from 7% to 2.4%.

The 19 NICUs in the Healthcare Associated Infections Collaborative decreased catheter-associated bloodstream infections (CABSIs) by 75% in infants with birth weights ≤ 1500 grams. The project aimed to reduce the occurrence of CABSI to almost zero system-wide.